The days become shorter, the air gets colder, pumpkins appear on doorsteps, and suddenly kids roam the streets in creepy masks. You know this season and you recognize its behavior. You know its brand consistency. As the familiar brands of candy are handed out, you recognize their logos, the design elements on the wrapping paper, and the speaking pattern in their descriptive texts marketed to sound delicious to kids.

You’ve probably heard of the possibility of kids being handed candy by people with ill intentions. Knowing what brands typically roam around at Halloween, may give you a heads-up when there’s suddenly a brand that you do not recognize.

Maybe its brand image seems off. Maybe it mimics another known brand, almost fooling you to believe it is the real thing. But is it worth it to try it when you feel like you can’t trust this brand? Would you take the risk?

There are many reasons to keep your brand identity consistent. If your brand seems to wear a mask, or changes its costume too often, the audience might lose trust in your brand or they will stop recognizing you. As the spooky season is ending, so should the fear of your brand image appearing as something it is not.

But what does it matter if your brand is consistent or not? Does anyone care if the brand tone of voice or overall visual elements change? What does brand consistency mean and what can be some scary outcomes of not staying true to your brand guidelines?

The importance of building trust with brand consistency

Having a consistent brand can help your audience trust it. People usually like predictability from the brand identities they follow and know. Knowing what a brand would say or do helps them feel like they know it and can trust it.

Seeing your logo should bring positive feelings and invoke a feeling of familiarity. If they like your brand and its products, they will identify with your brand and be loyal to it. Just seeing your brand colors could trigger the audience’s brand recognition.

Seeing a masked killer in a horror movie does not invoke positivity and trust, quite the opposite. You never know its next move, and you don’t know its motives or whose face hides behind the mask. An inconsistent brand, that seems to change its motives or core values frequently may give your audience an uneasy feeling and they will not trust or relate to the brand and the products it provides.

The first example I will talk about is British Petroleum and its attempt to become the greener, more environmentally friendly company of Beyond Petroleum. In the early 2000s, British Petroleum rebranded itself to Beyond Petroleum, claiming that it would work its way away from petroleum to green, sustainable energy. It redesigned its logo into a blooming flower, giving off the impression of becoming a greener, more sustainable brand, keeping the same yellow and green color palette.

Under financial pressure, Beyond Petroleum decided to sell off its solar and wind assets, quietly abandoning its rebrand.

Changing up the logo and going for a new brand strategy, didn’t hit their audience as intended. Claiming that the brand is one thing, but in practice acts as something else, will make the audience question the brand’s values and if the brand stands for what it claims. This can damage the brand’s credibility.

Another example of how brand inconsistencies changed the audience’s perception of the brand is when Coca-Cola decided to reinvent its most popular drink. Due to losing a taste test with PepsiCo in the 1980s, Coca-cola attempted to regain market share with a rebrand. People were devastated when the New Coke arrived on the shelves with its new shiny design elements and learned that the old formula would be discontinued.

People didn’t care that the New Coke scored higher and tasted better. They wanted the familiar Coca-Cola that they knew and loved.

Seeing their numbers tank after introducing the New Coke, Coca-Cola accepted defeat and brought back the original formula. Because of their extreme actions to regain the market from PepsiCo, the company had sown seeds of untrustworthiness with their consumers and made them question their credibility. Can their audience be sure that the company won’t pull another stunt like that again?

Then we have the clothing brand JCPenney’s, which has changed its logo and brand identity repeatedly over the years, so much so that knowing which logo was the updated one or what brand colors they had chosen, was challenging to figure out.

JCPenney’s is a classic example of brands not being in sync with their target audience. Ignoring their audience can damage the perception of the brand. Confusing marketing made the audience unsure as to what the brand was even trying to convey.

JCPenney’s brand strategy was to mimic Apple’s branding strategy. Apple’s products are seen as luxurious and exclusive. Because of this, Apple’s marketing strategy works.

JCPenney’s is a clothing and home goods store that sells at low prices. In other words, essential products for a fair price. Nothing luxurious or exclusive.

Apple has always stayed consistent with its branding. It has become a good example of how to maintain brand consistency.

Although JCPenney’s tried to mimic its branding strategy, it misunderstood what Apple was truly doing.

Apple has built up its branding over time, setting the foundations of what they are today, its main strength always being its brand consistency.

Apple has managed to keep a consistent brand image across channels and products, knowing well their target audience, being influenced well by graphic designers, and having consistent color codes across all products.

How to hold true to brand consistency

Communication takes a while to sink into the audience. Changing it too often will make it harder to stick. What are you trying to convey? What do you want to give your audience? Make sure this is common knowledge across the business.

The brand’s actions must reflect the mission statement. What the previous example, Beyond Petroleum, told us is that saying one thing and doing another can create inconsistencies with what the brand wants to communicate.

From JCPenney’s example, we learned that knowing your audience, and why they do business with you is important to retain customer loyalty.

Confusing your audience with different statements that don’t reflect on the audience that buys the products will make audiences less likely to purchase its products again.

Watch out for inconsistencies

Inconsistencies can happen from time to time within a brand. Perhaps the agency has been given the wrong files through an email, or a post on social media doesn’t align with the brand’s mission statement.

Catching these and adjusting them to align correctly with the brand identity will help ensure the brand is being represented correctly and consistently.

The difficulty of maintaining brand consistency

Making sure the brand is consistent can be challenging and tedious. Using a digital brand book can help businesses stay consistent by keeping all brand assets in one easily accessible system.

With brandguide.io you can manage things like brand voice or tone of voice in the form of sample texts. Branding elements like photos, videos, and graphics can be stored and organized like a media library.

You can keep track of color assets like color palettes or hex colors, instructions on how to use them, and many more features.

The system is created to make brand guidelines easy to set up and use and provide quick brand delivery, saving valuable time that can be used elsewhere.

Having a digital brand guide helps the audience understand the brand and its values. With a clear, concise digital brand book, there will be no room for confusion.

Be able to represent your brand professionally and seamlessly!

Interested in learning more about the benefits of digital brand guidelines? read our previous article titled “How PDFs hurt your brand identity”.

Happy Halloween from the brandguide.io team! 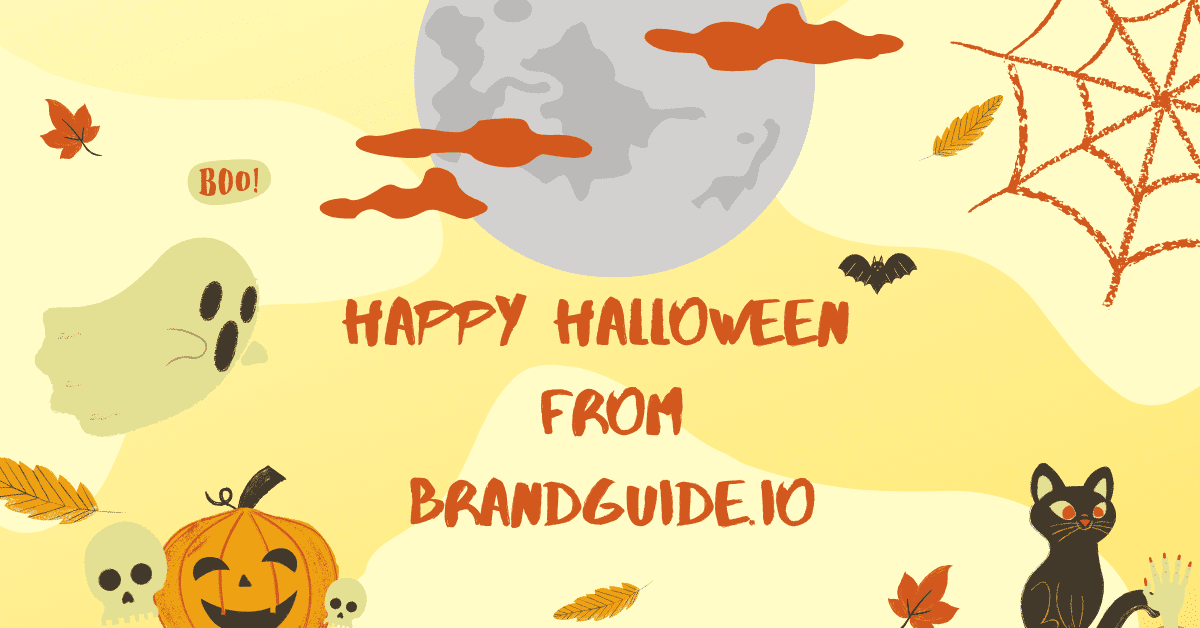 The days become shorter, the air gets colder, pumpkins appear on doorsteps, and suddenly kids roam the streets in creepy masks. You know this season and you recognize its behavior. You know its brand consistency. As the familiar brands of candy are handed out, you recognize their logos, the design elements on the wrapping paper, and the speaking pattern in their descriptive texts marketed to sound delicious to kids. You’ve probably heard of the possibility of kids being handed candy by people with ill intentions. Knowing what brands typically roam around at Halloween, may give you a heads-up when there’s…